On Christmas Day 1990, we opened our doors and began providing services to isolated elders in San Francisco. The inspiration for our work, however, was born in 1946 France. 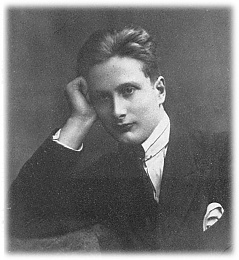 Armand Marquiset was born on September 29, 1900 in the château of Montguichet near Paris. Thanks to his parents and grandparents he had an agreeable childhood. As a youth he was shy and not an outstanding student although he was interested in music and studied with Nadia Boulanger.

Early in the 1920s he and his grandmother, Madame de Laumont, visited less well off families who had lost sons in the war. This was the first time that this young bon vivant was confronted with genuine poverty.

His life from 1920 to 1930 was full of contrasts. In 1925 he returned to his Christian faith and at the same time, hosted regular parties at his splendid villa near Honfleur. On the one hand he cavorted with Hollywood stars and on the other he often visited the monastery Solesmes to pray and reflect.

The death of his grandmother in 1930 gave him a shock that had far reaching consequences.
He said:

This death will change my life … I can no longer compose music. I contacted Nadia Boulanger and told her that I had decided to abandon my music and involve myself in service to the poor.

He began his humanitarian work by preparing meals for homeless people through Oeuvre de la mie de pain, the “breadcrumbs” Organization. He then founded the organization Pour que l’esprit vive  (That the Spirit shall Live) in support of unemployed artists. He also founded les Amis de la banlieue (The Friends of the Suburbs) in order to assist the poor children of the Parisian suburbs.

However, Armand Marquiset longed for a larger organization that would encompass all of his charitable activities. Gradually the idea of “petits frères” took shape in his mind.  In Paris on July 7, 1939, while at prayer in Notre Dame Cathedral, Marquiset had a mystical vision that gave birth to the Little Brothers: “I saw Little Brothers,” he said, “spreading across the earth, igniting little fires of love.”

But the outbreak of World War II caused him to set these plans aside in the interest of more pressing needs. In 1939 he therefore started Servir (To Serve) through which he relocated the children of active soldiers to rural areas. In Lyon he assisted refugees from Alsace Lorraine through Secours national and he organized the provision and distribution of food with the help of Lyon-Charitable that can now offer up to 70,000 meals per day. Furthermore, he spread his influence and assistance to Algeria and Spain.

At War’s end, Marquiset returned to the idea of Little Brothers.  However, after observing and hearing about post-war conditions in Paris, he decided to focus the effort on elderly people: “1945 was such a precarious time for elderly people… (it)… became the most pressing problem. The war brought them poverty…and it became critical to help them, especially to help them continue living in their homes – the difficult situation presented challenging conditions.”  For Marquiset, the spiritual needs of these elderly people, left alone and isolated by the war, were even greater than their material needs.

He decided to help these needy people, calling them his “friends.” He began alone, working out of a rented apartment in a poor section of Paris, visiting the elderly poor.  To them he brought sumptuous meals and flowers, which expressed his affection and love for them.  He summed up his mission with the motto, flowers before bread, which reminds us that help for the needy must be animated by love.

Marquiset’s powerful example of love and service soon attracted many followers, both volunteers and donors.  The Little Brothers began to offer beautiful Christmas celebrations, acquired palatial estates where they offered vacations for their elderly friends, and in time founded various branches of the organization within and outside of France.

Armand dedicated himself to this “adventure in love” for 20 years.  After a 1964 trip through India during which he became deeply troubled by the extreme poverty he witnessed, he created Les Enfants du Tiers Monde(Children of the Third World). He withdrew from leadership of Little Brothers in order to found Frères des Hommes (Brothers of Men), an organization that has spread to many developing countries on three continents.

In 1969, a heart attack caused him to give up leadership of Frères des Hommes. This event, however, did not prevent him from founding yet another charitable organization, Frères du ciel et de la Terre (Brothers of Heaven and Earth) in 1972, with the mission of helping homeless people.

Up until his death on July 14 1981, in Burtonport, Ireland, he continued to involve himself with his fellow mankind.

Though we all function as independent organizations, we share the mission of offering companionship and alleviation of isolation among the elder population of the world. We are no longer a Catholic brotherhood nor do we have any religious affiliation. However, the LBFE of today continues to embody the notion of "Flowers Before Bread" that Armand Marquiset set out to share with the elderly. For information regarding other chapters of LBFE, access the National Portal at: http://www.littlebrothers.org/

Member of the International Federation of Little Brothers of the Poor